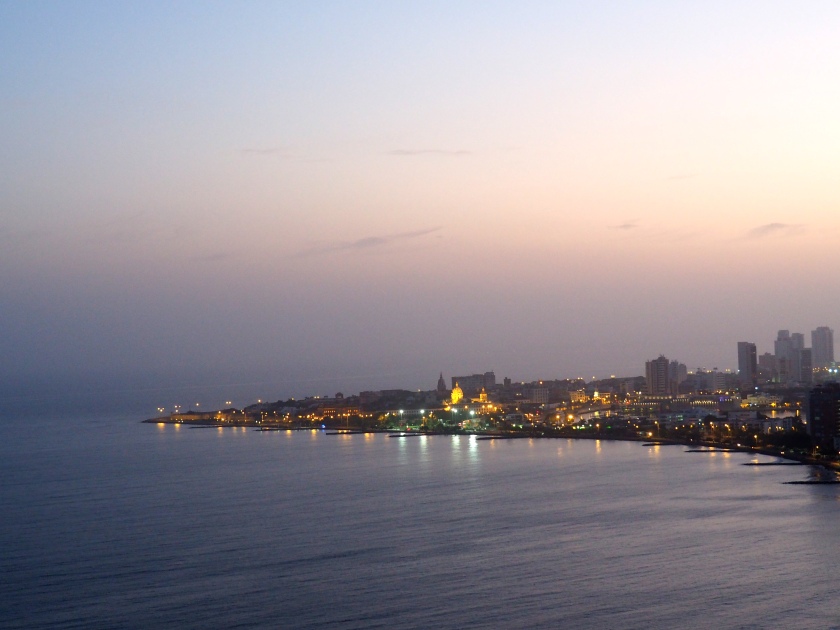 In a blink of an eye nine months were gone and the time to wave goodbye to South America has come. Back home, in the daily routine, it does not look like a lot of time. But nine months could also make a big difference. Nine months are enough time to deliver a baby, enough time to fall in love with whole continent, to hate it and to love it again.

Nine months ago, we hit the road. We visited 3 continents, 13 countries, crossed 31 borders, slept in 132 different beds, drove 51,127 kilometers. We had bad days, we had good days.

We tried amazing dishes and we went to bed without dinner.

And after all these months, I could say that no matter the cost or the challenge, travel is always worth it, and I love it. Well, most of it.

The goodbye to South America was as interesting and memorable as everything else around us.

As probably some of you know, there is no road between Colombia and Panama. Many say that this is because the terrain is very difficult, but after seeing some of the craziest roads in South America, I would believe more the ones saying the reasons are political.  As a result, the North and South American continents are separated by 100 km of mountains, marshland and are unpassable.

Of course, I checked if it is possible to cross it with a car and found some enthusiasts that made the journey in the early 70’s, as well as, many which did not, and some which even died there. I did not even consider proposing it to Ivan. After our fiasco at BR-319 (see BR319 ) I think I am smarter.

After nine months we were again in Cartagena and in a couple of days we managed the documentation for our car. We locked our Fory in a container watched how it was locked and prepared to make it to North America by plane.

Wait here, it was not such an easy task. Before we locked the car in the container, it had to pass customs inspection. I have crossed many borders in my life, and this was the most diligent inspection I have ever seen. I drove the car in the middle of a huge cargo lot full of containers and was told to wait there for the customs officer. It was 40C and probably 90% humidity. After a while, the officer came, asked me to sign some papers and started the inspection. He removed the seats of the car, all four door panels, asked me to take out all our luggage, take everything out form the bags, open tents, sleeping bags, etc. At some point all our stuff was spread around the car in an area about 10 by 10 meters. About two hours into the show, the officer found a nice small pocket knife in the glove box, looked at me and asked if he could have it. I was already so pissed off, that I said “No, you can’t have it”. This probably extended the inspection by two more hours.

He opened every box of medicine we had, took one pill, and tested if it is not the good white stuff.  The culmination was when he took the spare tire, started preparing to open it and asked me if this is OK. I was already beyond the angry attitude, started laughing and told him that is OK, but just to make sure he puts it back together after he is done. He smiled too, stamped the documents, and prepared to leave me in the middle of all mess.

At this point I could not resist and took my revenge. I had couple of hidden places in the car for keeping documents and cash, which he did not find. I took him to one of the hideouts, opened it and told him “By the way, there is nothing hidden here too”.  Turned out that he had a sense of humor, he just laughed, and left me realizing that he was just doing his job.

It took me may be an hour more to put everything back together in the car, but at the end I drove Fory into the container and had it sealed.

We had five days and instead of flying from Cartagena to Panama City, we decided to make a detour and stop for two days in Toronto. After 9 months on the road, our finances were not in amazing shape and there were some things we could not do online or over the phone.

We booked separate airplane tickets – one from Cartagena to Bogota and one on Air Miles points from Bogota to Toronto. Separately, we booked our return tickets from Toronto to Panama City.

Ivan woke up early on July 15th by email reminding him that his flight is in two hours.  What?  Weren’t were supposed to fly tomorrow? The ticket from Bogota to Toronto is on 16th of July!!!

There was nothing we could do with tickets expiring in an hour, so we just bought new ones for the next day.

If you have not spent nine months in South America and just like that land in Toronto, you will never understand the feeling.

I always have wanted to live in a warmer climate. I hate cold, rain, snow. The warmer climate automatically means lower geographical latitude. The last few mounts we were traveling between that tropics and around the equator and I had to go back to Toronto to find out what was bothering me. It is the darkness or more specifically, the shortness of the day. At 6 pm it pitch dark between the tropics all year round. I am not a morning person, do not ask me to do any brave or smart things before 10 am and don’t try to send me to bed before midnight. In mid-July in Toronto, I was enjoying a twilight at 9.30 pm. So, probably the best option for me will be to enjoy the summers in Canada or Alaska and the winters in Colombia or Peru

Anyway, two days were gone like a dream and we are back at the airport again for our flight to Panama.

Early morning, we were checking our luggage on a one-way flight to Panama City. Everything looked great until the moment the Air Canada clerk said:

“Could you show me your return tickets”

“Sorry, I cannot let you go to Panama with a one-way ticket. We have to make sure that you will return and will not immigrate to Panama”

And like that, 10 minutes before the boarding time started, we were stuck at Pearson airport, with the only option to buy a return ticket to Toronto. So, we bought the most expensive refundable ticket available for the for the unbelievable CAD 3,000 per person and cancelled it once we got to Panama.

The next day we finally were reunited with our car. We spent the day driving from the ship company office to the next office, and then to the other office, and then to the third,  fourth and so on offices. We filled hundreds of forms and then looked for copier to make 17 copies of each of them and then filled more forms and copied them again. Clearing the customs is Panama could be responsible for the deforestation of the planet.  Finally, the container was opened and there HE was. Our Forry. It was like meeting an old friend.

I have to admit, we fail to pay the fee for Panama highways. We had the best intention to buy a pass for the Subaru (the rental car comes with pass included) but after wasting half-day in the Panama transportation department our good intention turned fruitless. There is no way to purchase a temporary pass for a foreign registered car. At the end, the transportation officer advised us:

“You have to use the back roads from Colon to Panama City or… if you drive very close to the car in front of you at the check points, you can pass the barrier, together with the other car”. And since the advise was from an officer of the Ministry of Transportation, we listened.  Ivan was driving the rental car and I was following awfully close with the Subaru. It worked.

Before we said goodbye to Panama City and took the long drive to Toronto, we had to visit the famous Panama Canal.

Nothing amazing, the water comes in, the ship enters the passageway, the water goes out, the ship exit. I have no idea what all this fuss was about.

That is what one could expect as an explanation from someone with humanitarian education. I would have stayed there watching this engineering marvel for days…

The last day in Panama, we stopped and hiked to the Lost Waterfalls close to Boquete. If I must choose five places out of our trip where I would want to live, the small village of Boquete is one of the places.

It is still close to the equator, but at 2,000 meters altitude the climate is like a constant spring.  The house we rented had a little garden where everything was blossoming. The days were pleasantly warm, and in the nights, there was a cool breeze coming from the mountain.

On the trek to the Lost Waterfalls, I finally pinpointed what was bothering me for a long time. We were the oldest people around almost everywhere we went trekking. I totally agree with Terry Pratchett – “When I was young, the world was full of old people. Not it looks to be the other way around, there are young people everywhere.”

While we were discussing with Ivan how we are the oldest people around again, we approached a small river we had to cross. There were some stones in it, Ivan jumped across stepping on the stones easily, I followed a bit slowly and more carefully. We sat on the other bank of the river enjoying the scenery and taking pictures. At this point couple of young boys and a girl showed up. One of the boys passed the river, but the other one and the girl could not make it and the entire party turned around and left. We looked at each other and said – well, oldies but a goodies.