Brazil : BR-319 – Mud, Sweat and Tears or Chronicle of a Death Foretold

We were still in Canada, preparing for our trip when I found the amazing pictures of Mount Roraima in Venezuela. We immediately decided that we must visit the place. After few options which didn’t work, we decided to drive from Bolivia and through Brazil to Venezuela.

That automatically meant we had to drive on the infamous BR-319. A quick browsing through YouTube videos and Google pictures showed a nightmarish dirt road, with huge potholes, deep red mud trenches and wooden bridges, as well as, many stuck in the mud cars, trucks, busses.

Looks like a perfect adventure for us, doesn’t it?

BR-319 or Brazil’s worst highway is an 840-km road, part of the Trans-Amazonian highway.

It was built through the beautiful Amazon rainforest in the early 1970s to connect Porto Velho with Manaus and after that was left without any further care.

Nowadays, here you can see how the world will look after people. Preparing for this perfect adventure, I collected as much information about the road, as possible. I joined a Facebook group about BR-319 and asked for more information.  The simple and straight answer to my question: “Can we drive to Manaus with our Subaru Forester?” was “Nao”.

I didn’t like that answer. What do they know about our magnificent car? I knew I would be sorry if we don’t try it. We were at Porto Velho close to the end of the rainy season. We should be okay. We just drove 500 km on red dirt road in Bolivia and the conditions were not so terrible. We crossed Pantanal on 150 km dirt road and it was OK. Surely, the fame of BR 319 is over exaggerated.

Just in case, in Porto Velho, we checked for other options. The main way to reach Manaus from Porto Velho is Madeira river that flows into Amazon.

At the port, the boat man gave us quite a high price for us and the car. And the trip was four days and started in two days. We were short on time, so we decided to try the road. The boatman looked at us with disbelieve: “You cannot make it this time of the year with your car!”. One more sceptic.

Then we drove to Humaita, the last village on a good asphalt road, 200 km after Porto Velho and tried for another boat option.

Even the birds wer sceptic about our plans 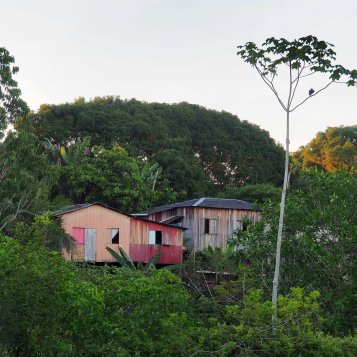 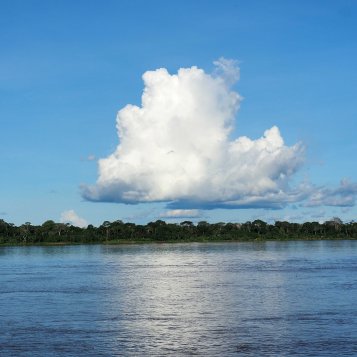 There was nothing available and the two ladies at the port got shocked when they realized what we are going to do. They started to show us pictures and videos on their phones for what to expect. Yeah, we have seen them all. And we think that the pictures and videos are exaggerated and were made only to show off.

After a night at a nice hotel in Humaita, in very good spirit, I posted an update on Facebook (let my friends know where to look for our bodies if something happened 😊) and we hit the road. 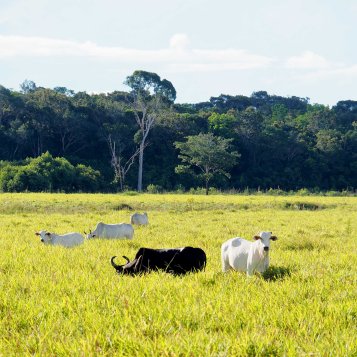 There cows in the farms next to Humaita

It was drizzling, but the forecast promised some sun in the afternoon.  The first 30 km were okay. There was still some bad asphalt left from the old road. There were big pot holes, some of them so big that we met a huge truck stuck in one of them. We passed carefully and successfully and that lifted the spirit in the car.

When we reached the red dirt road, we were only 650 km away from Manaus. For the first day, our goal was to sleep in Pousada Costa Rica – small hotel 388 km from Humaita.  We started at 8 am and planned 10 hours for this. It seemed doable. Around 12, I started to worry. Our average speed was 12 km/h. We were running out of time.

The monkey looked at us with disbeleive

There were nice birds in the forest aroun the road

Most of the people we talked about BR 319 strongly advised us not to camp, not to stop and not sleep on the road. A man, at the last gas station, in the small hamlet of Realidade, told us that we cannot drive to Manaus with our car and that there are stories about people eaten by cannibals back in 70’s when the road was built. Later, I checked on Internet and could not find any conformation, so most likely this was just urban legends to scare us. But still, I didn’t want to stop for the night and the condition of the road did not allow us to drive in the dark. Around 4 pm, we had only 250 km behind us and the goal seemed impossible.

At this time we reached the next mud spot. 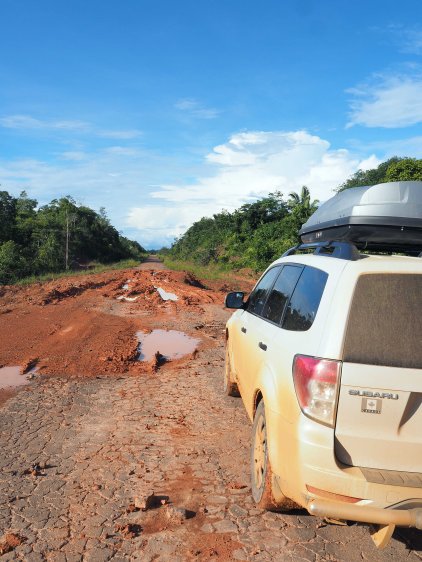 In the beginning, it didn’t look much worse than the 50 or 60 other mud spots we already crossed. The “mud spots” were in general on the places of old wooden bridges. The bridges have collapsed and have been replaced with huge pipes, covered with pile of red Amazonian clay. And the red Amazonia clay is the stickiest substance I’ve ever seen. According to Ivan, it’s made with at least 50% C200 glue.

Ivan had concerns about passing this particular one and asked me to get out of the car and guide him.

I couldn’t see any difference, it didn’t look bad to me, but I obeyed. And this was the pothole that stopped us. Still I am not sure if it was so bad, or it was my expert guiding, but Fory slipped and stopped there.

So now what? The clouds finally cleared, the drizzle stopped. It was hot, humid, the sound of the insects was overpouring.

We used leaves from the jungle to put them under the tire.

We used branches we cut from the trees. 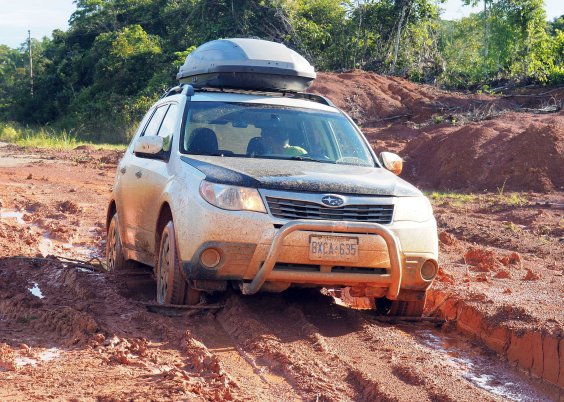 We dug stones and debris from the old bridge.

Nothing helped. We just got covered head to toe with red mud. 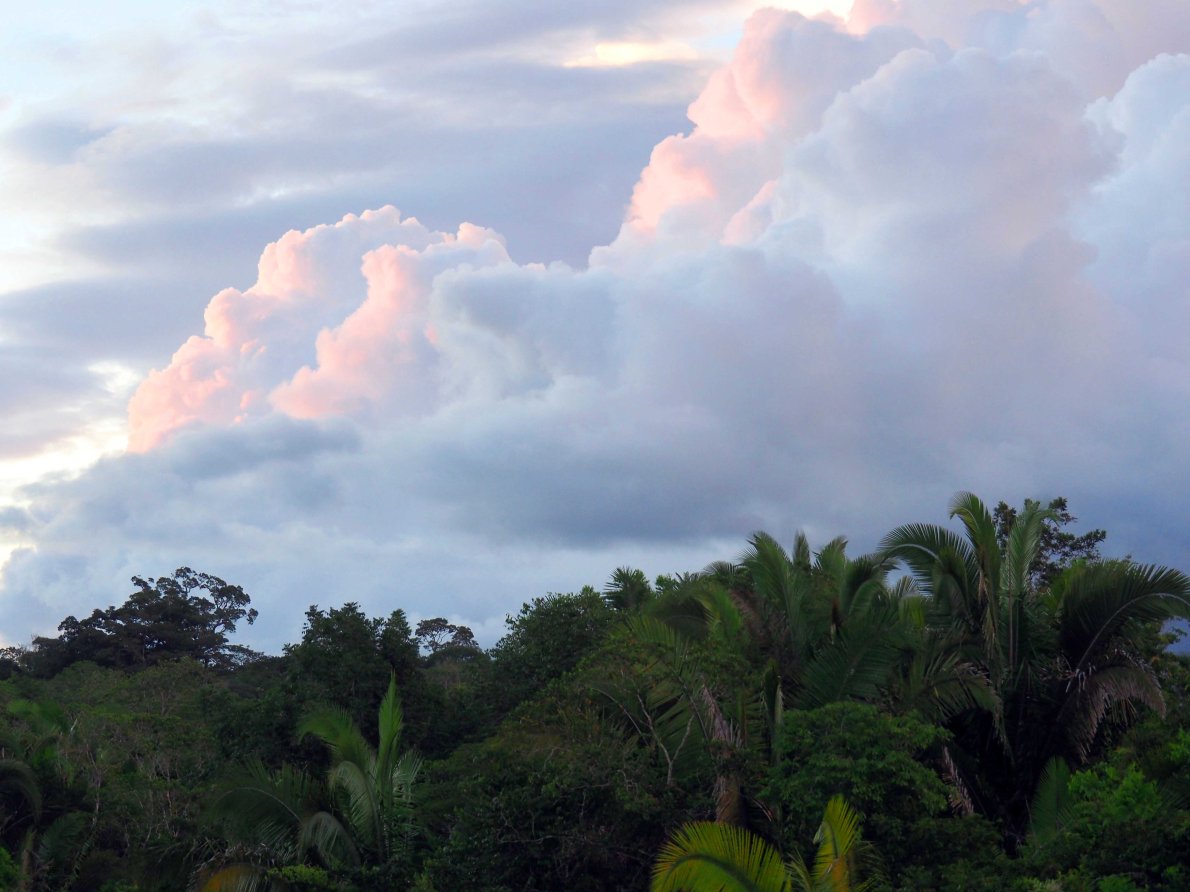 Beautiful twilight, and even more beautiful sunset over Amazon jungle.

Birds singing, bugs buzzing, I would have called it romantic if we weren’t stuck in the mud.

At this point we did the only possible thing – prepared to sleep in the car. At some point I opened the door, looked around and… there he was. A dark figure of a scary, wild, Amazon person. In the twilight, I couldn’t to see it very well. He disappeared in the bushes when he saw me getting out of the car. To say that this scared the hell out of me will be understatement.  I flew back to the car and I started screaming at Ivan.

“You have to go and see who he was and what he wants. It is still not very dark, it must be done now. Go now. Don’t even think to wait”

My poor Ivan looked at me, I was close nervous breakdown, opened the door and slowly went towards the bushes where the dark figure disappeared.

I couldn’t wait anymore. I got the machete in one hand and a Swiss army knife in the other and open the door. It was almost dark now.

A tall dark figure got out of the bushes and started walking toward the car. I was holding the machete, ready for fight. The figure got closer. It was my brave Ivan, alive and smiling.

So, I was sent on a suicide mission by my loving wife, even without a goodbye kiss. Shortly I found out a small patch of land cleared in the jungle. It was just 300 meters away from the place we were stuck. A couple of native people was living there in a small hut, growing bananas and tapioca.

The communication was not easy, but they understood we are stuck in the mud. They offered help and invited us for dinner (not in the Dr. Hannibal Lecter meaning) and to spend the night at their place. I said that we have food and we will sleep in the car, but I may need some help to get out of the mud. They just advised us not to get out of the car during the night, because jaguars were common around and they used to kill animals.

In the morning, I went back to their place and borrowed a shovel and couple of wood boards. After an hour digging in the mud, I was able to lift the car with the jack on one of the wooden boards and to push the other one under the tire stuck worst in the mud.

With Marinela and our new local friend pushing, a lot of cursing, engine revving and mud flying literally meters in every direction, somehow we managed to get out of the trap.

During the night, we talked with Ivan that if we can get out of this mud pool, the smartest thing to do is to turn around and return to Porto Velho. I don’t like to return. I don’t like unfinished business, but we have a saying that the best mountain climber is the one who is alive.

In the morning, the couple from the hut came with some coffee to help us and I talked to the lady. She told me that the road gets much worse going forward and we were lucky to get the car out only after one night. Two weeks ago, a man got stuck in this same place and stayed there for four days. I asked if there are any cars passing and she said : “Nao. Not in the rainy season. A truck per week, or even a truck every two weeks. But when the dry season comes, there are cars, buses, big trucks. They don’t stop day and night”

This time, for the first time, we decided to listen to someone’s advise. When the car was finally out of the mud, we looked each other and turned around.

We were very careful to pass around the gas station in Realidade, as quiet and far away as possible. We didn’t want to see the man, who filled the tank the day before and told us that we cannot pass BR 319 in rainy season.