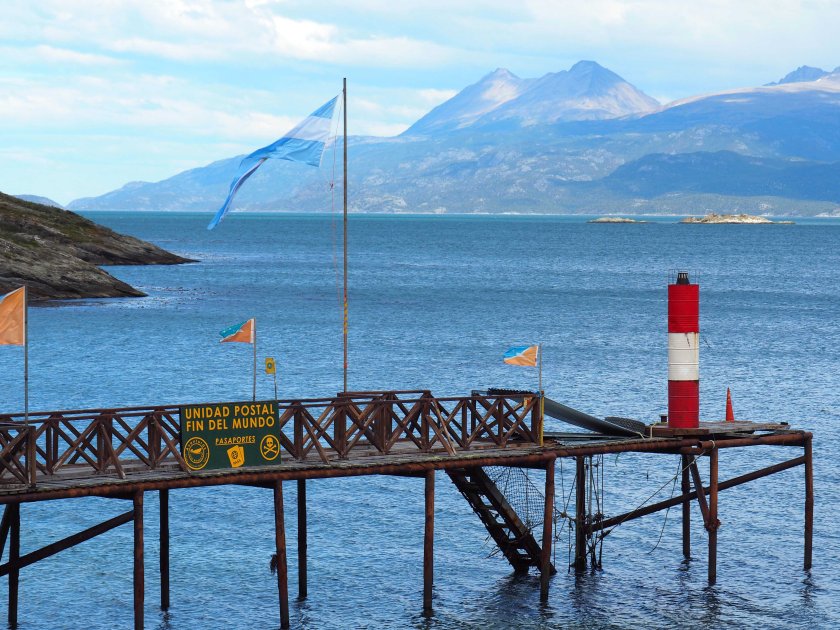 Punta Arenas and end of the world in Chile 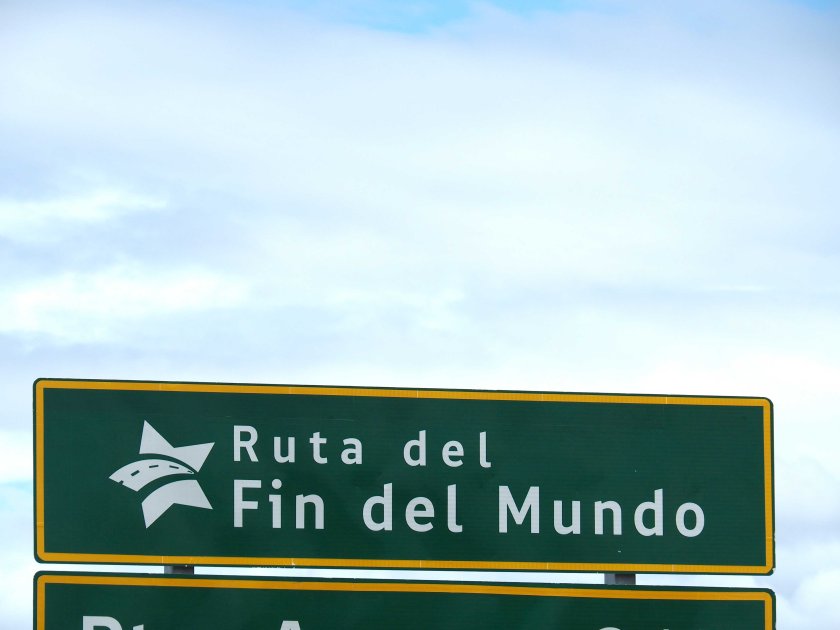 It is a funny feeling when after four mounts driving you reach a road sigh “Fin del Camino” or “End of the Road”. 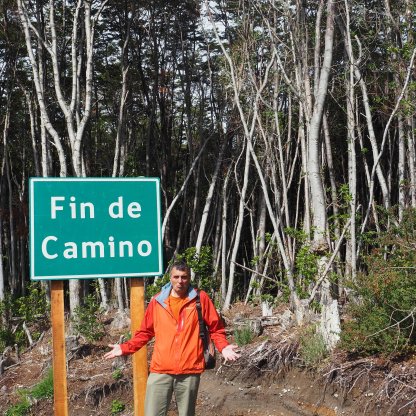 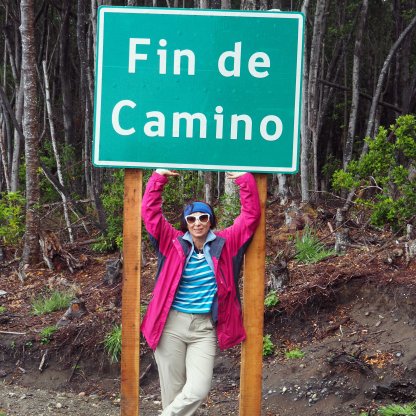 Now what? The only reasonable action is to take few pictures and turn back. Before doing this, we decided to push a little bit further and to walk few more kilometers on the beach to the tip of the continent.

Cabo Froward (or Cape Froward) is the southernmost mainland point of South America. It is south of Punta Arenas in the Magallanes Region of Chile. This is the end of the American continent (or the beginning – depending on the view) 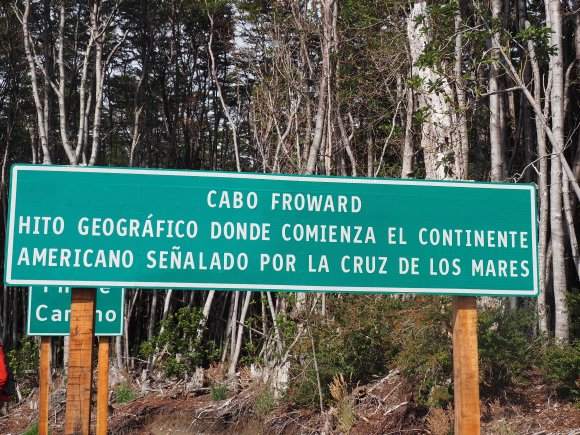 The first European to sail down the South American east coast was Hernando de Magellan with his expedition of five ships in 1520. He was looking for a new sea route to Indonesia. The strait he discovered was the most important passage between Atlantic and Pacific Oceans, before Panama Canal was built.

There is a beautiful 5-kilometer trek to the Cape Froward, following the northern coast of Strait of Magellan. The place is simply magical. I expected furious winds, big waves with white foamy caps and invisible coastline that can be glimpsed through deceiving fog.  Instead we walked on gravel beach surrounded by magical forest and cold blue water.

When we reached ‘The end of the world’, Ivan was so bewitched by the place that he started to sing.

For my non-Bulgarian friends, this is a song from an old Bulgarian movie. It says that the communists are on every kilometer, all the way to the end of the world. I don’t think Ivan was politically inspired for his performance.

On the long trek to Cape Froward and back (10 kilometers don’t seem too long but the wet, gravel beach proved to be very sloppy and treacherous) I had the time to think about our journey. 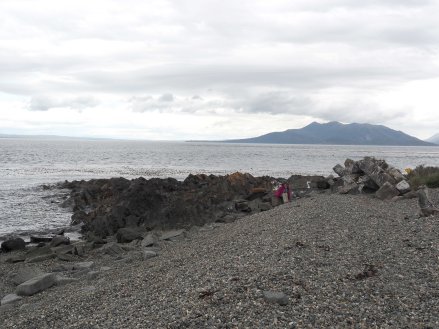 It is weird to wake up every morning in different bed or in the middle of the night to try to remember where you are and how to get to the washroom. It is a challenge to cook dinner at a kitchen you’ve entered just few minutes ago, working with bizarre looking oven or making a salad in a frying pan. 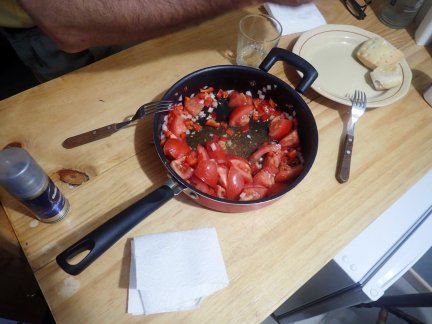 Every day is different – new place, new house, new town, often new country and new currency.  If someone has described lifestyle like that few years ago, I would have said “exhausting’. Now, I would say “stimulating”. On the long walk back from the end of the world, I was thinking about happiness. I never stopped asking myself if I am happy. I don’t know the answer, but I know that I have never been more in peace with myself. Also, with my better half. 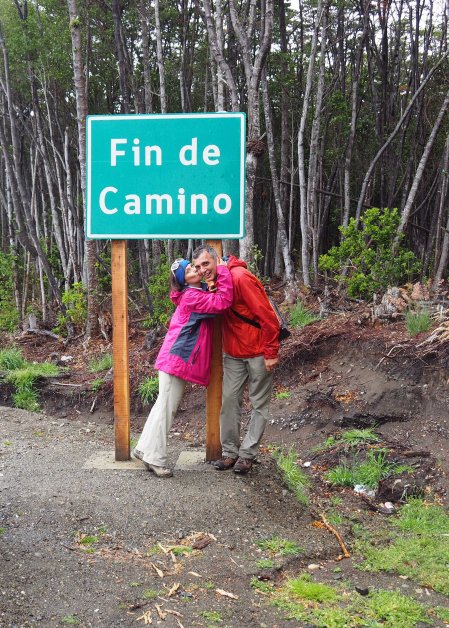 Chilean Patagonia is a strange place. It is more livable than the steppes in Argentina. There are huge fields covered with wild flowers, 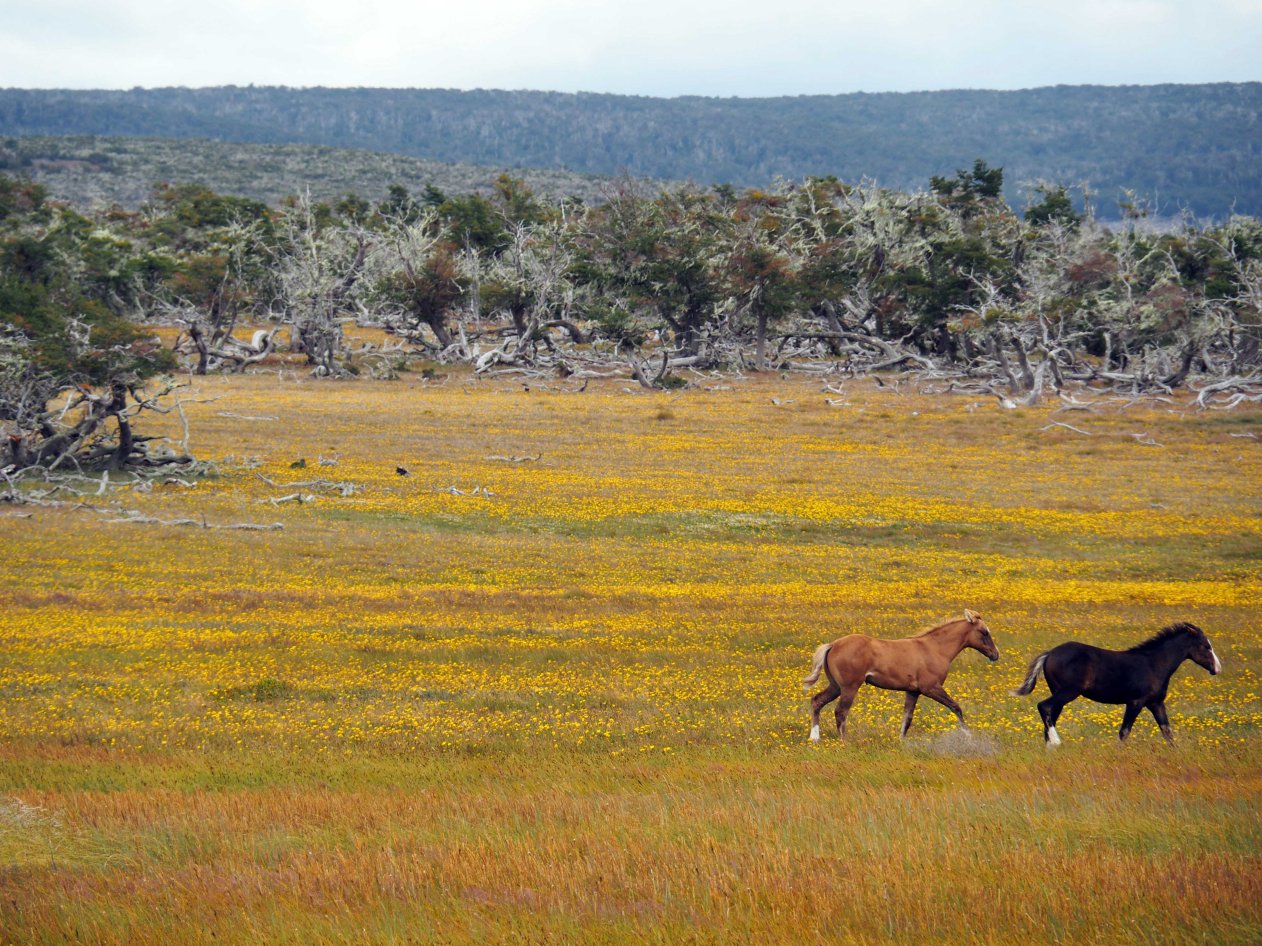 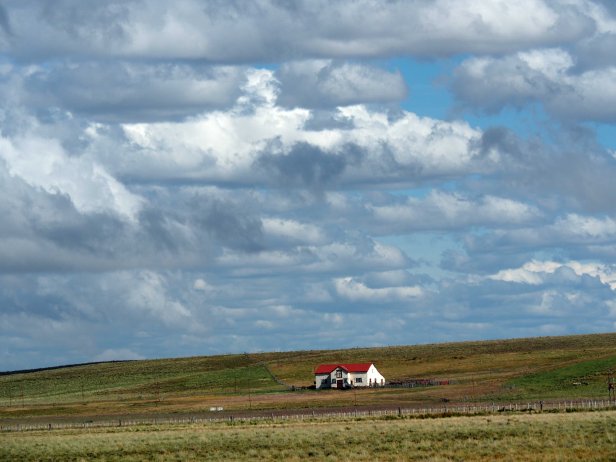 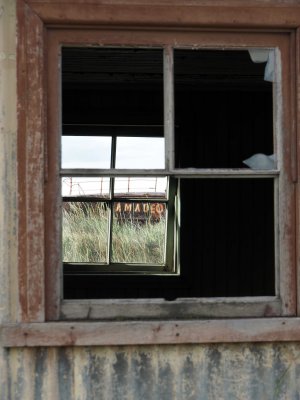 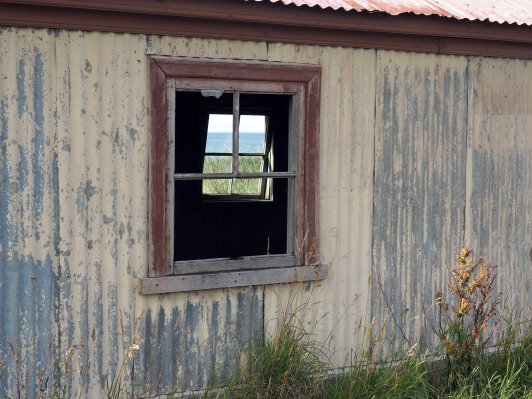 and of course, relentless wind. 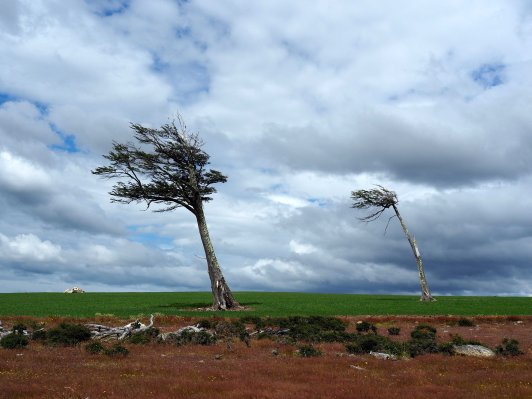 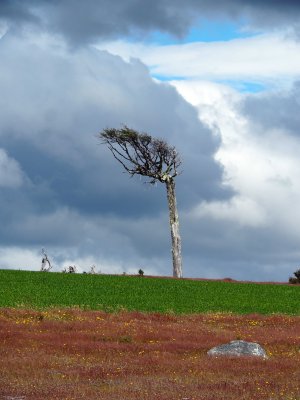 The end of the mainland is not the furthermost point that could be reached, so we headed to  Tierra del Fuego and Ushuaia. 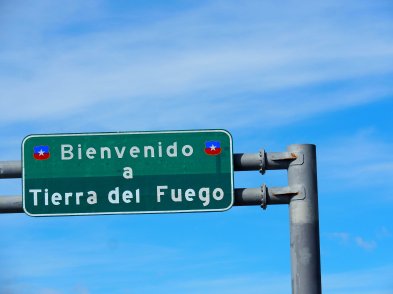 The island was first named Tierra del Fumes (Land of Smokes) by Magellan, because of the smokes coming from the fires on the shore. Later, it was renamed to Tierra del Fuego and the name stuck.  It always sounded mysterious to me. As a child, I had a book about seas and oceans. The stories about Furious Fifties and Cape Horn were one of my favorites. I still remember the tales from the first sailors about strange animals covered with soft fur, 11 feet tall unfriendly giant Indians, birds as big as the one from 1001 nights, terrifying sea monsters waiting for careless seamen to sail in uncharted waters. Eye witness descriptions of giant Indians encounters in Patagonia were common until the 1800’s. 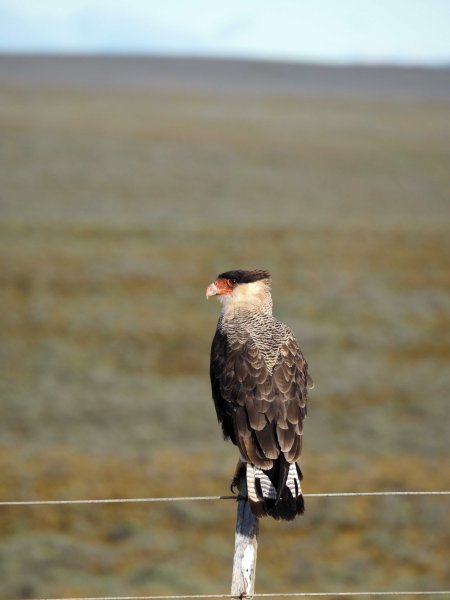 Funny enough, it turns out that the scary, strange animals with soft fur were the beautiful guanacos, 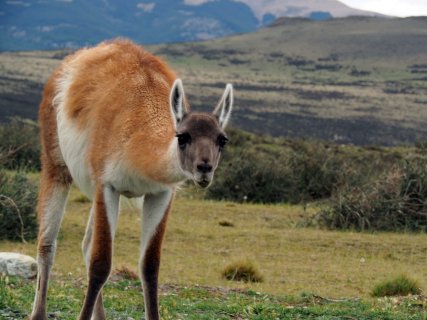 the sea monsters were the lovely penguins, 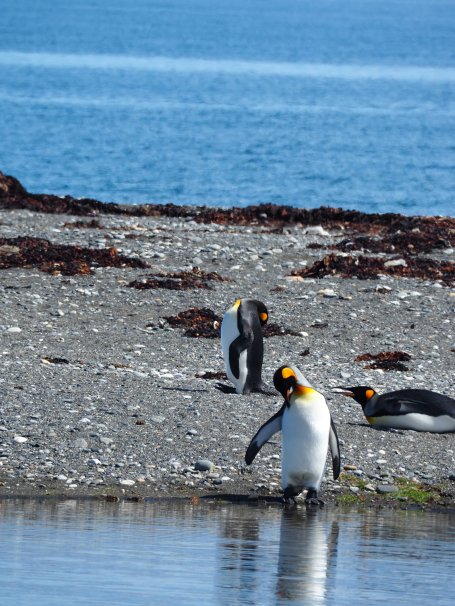 the most dangerous predator I met was a curious fox, 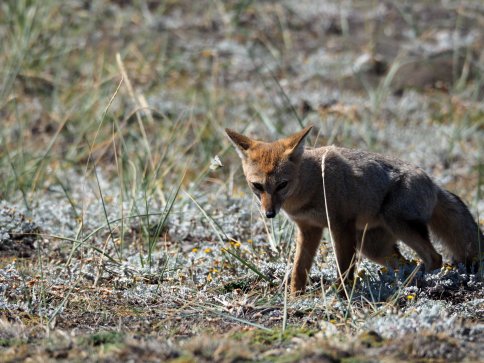 and the only giant I saw in Tierra del Fuego was the one I brought here with me.

Today, Tierra del Fuego is one of the least populated places in South America. With snow-covered mountains and windswept plains, it’s the right destination for an ‘end-of-the-earth’ experience.

Ushuaia, a former penal colony, claims to be the southernmost city in the world. 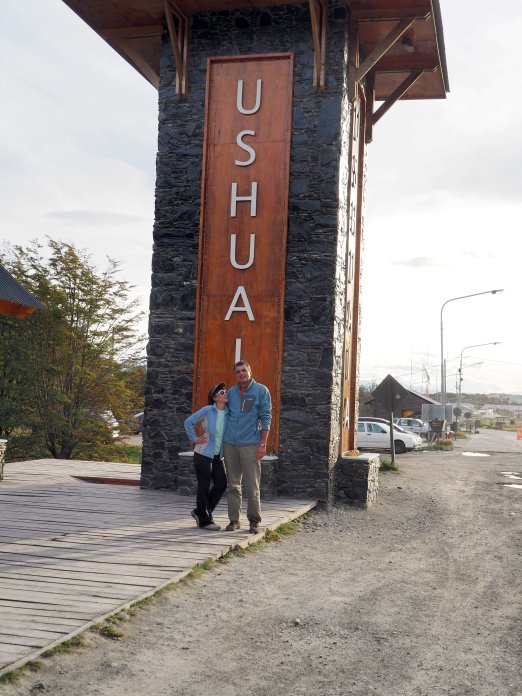 Only Port Williams in Chile challenges this title. The word Ushuaia comes from the Yaghan language and means ‘deep bay’. Many famous adventurers like Francis Drake, Robert FitzRoy and James Cook set foot here. The city is located on the shores of Beagle channel, named after the Beagle ship which sailed with Charles Darwin in 1833 – 34.

Ushuaia is a very busy port and hub for those who want to visit Antarctica, but if you walk on a sunny day around the port, you may feel like you are in the Caribbean. The water is bright blue and the port is full with beautiful yachts.

I have imagined Tierra del Fuego as a flat, dry place like most of Patagonia and never expected to find stunning mountains there. The place has its cold beauty and it is somehow reminds me of northern Canada.

Not only the vegetation and the lakes look Canadian. 70 years ago, someone imported our lovely beavers to Tierra del Fuego. Soon after the first beavers arrived, they started reproducing and created an environment very close to its native home in Canada. I think they love it here. 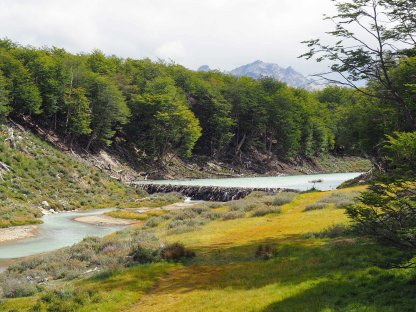 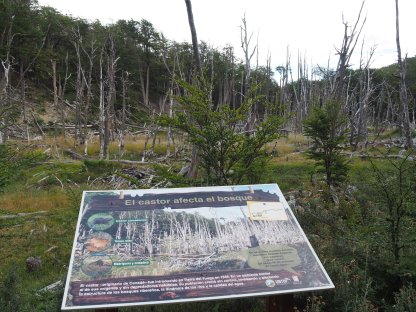 Our travel is a list of hits and misses and the not very popular National park Pali Aike was definitely a “hit”.

It is close to Punta Delgada in Chile, just next to the Argentinian border. The name in Tehuelche language means “desolated place of bad spirits”. It is a charmed place of extinct volcano craters, guanacos (of course) 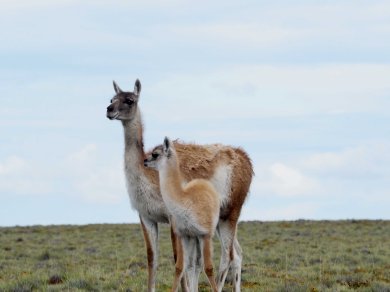 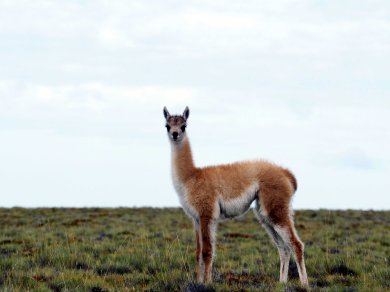 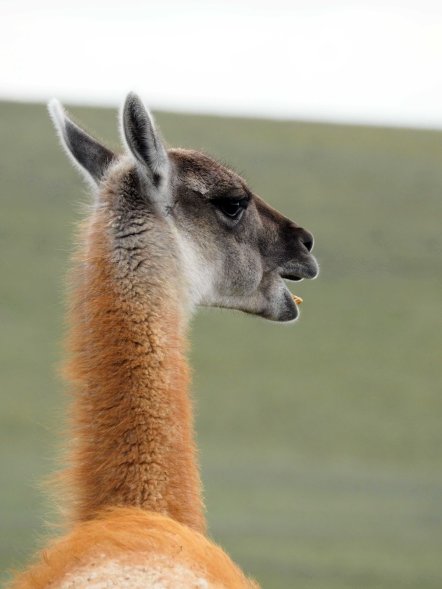 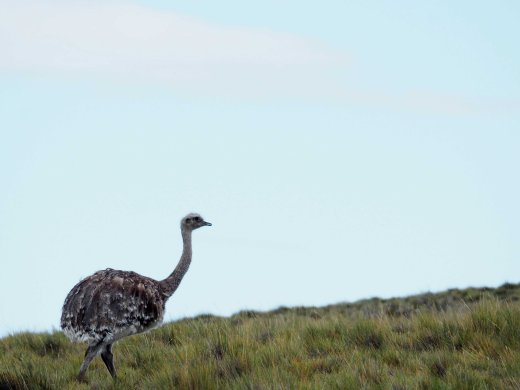 beautiful flowers. I am so happy I was able to find this beauty – Zapato de la Virgen. It is a native flower of Patagonia. 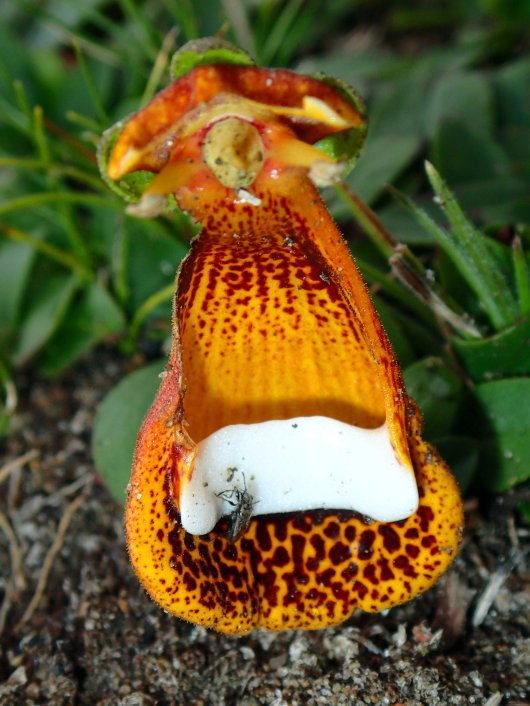 We had the entire park for ourselves and spent few hours walking inside the old craters on frozen lava rocks.

For our great delight, we found endless source of puffballs mushrooms. So, the dinner was arranged. 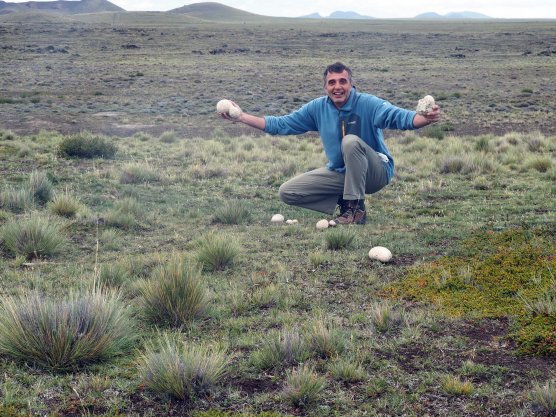 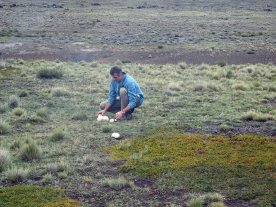 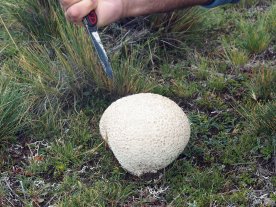