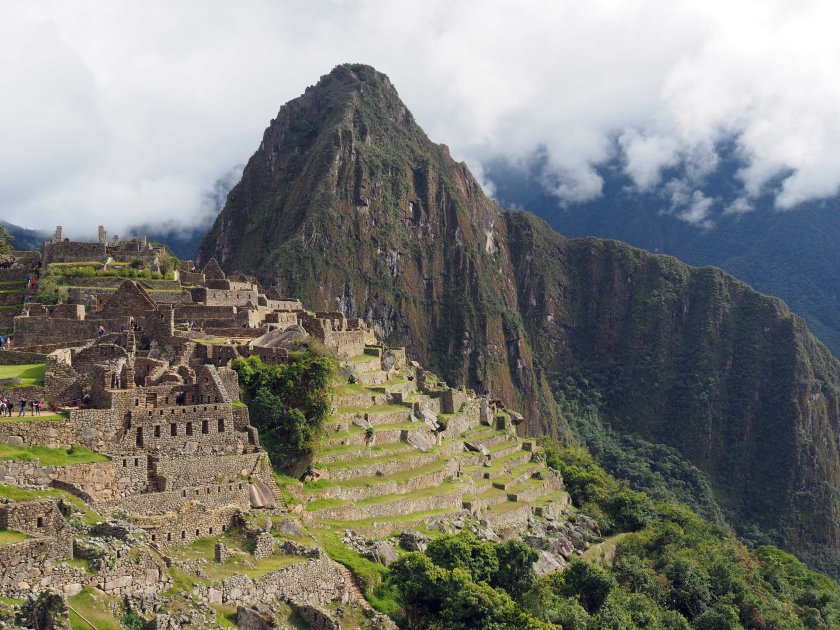 I must admit something. I might be a reason for death of a cat.  And few little kittens.

We arrived in our hotel in Agua Caliente in the late afternoon and decided to reach Machu Picchu the next day. The first thing I heard was a desperate meowing of a little kitten.

Ivan Jr and I used all our imagination and found a white and orange kitten on the roof of the hotel. It was just two-month-old and was hidden under piles and piles of building materials. We took it out, thinking it was stuck under the rubbles, gave it some tuna can food and left it there.

In a fast-growing tourist city in Peru, all new buildings and hotels are in various stages of finishing. Usually, the first two or three floors are ready and accepting tourists, and there are one or two more semi-finished floors under tin roofs.  Our ‘hotel’ was interconnected with whole street of other buildings in the same semi-build status. I this situation, a cat, a kitten, or even a person could move from one building to another and in some cases, could visit most of the city only through the interconnected roofs. So, we left the kitten there thinking that it will find its mom.

But we were wrong. The poor baby managed to reach the rooftop, got out of our reach and cried the whole night. In the morning, we put one more tuna can on the roof and went to visit Machu Picchu. When we retuned after the long day, the kitten was still there, meowing on the roof. We put one long board to the next roof, where we observed some other cat. We tough it was kitten’s mom, but apparently it wasn’t. When the kitty walked to the next roof, the other cat hissed at it and run away. When we went for dinner, I found on the street a nursing cat with the same white and orange patches as the kitten on the roof. I decided it was the mom, grabbed her, run to the top of our hotel and threw her on the roof with the kitty. Satisfied with my smartness and fast thinking, I went for dinner. I was sure, this was the mom and she will lead the kitten down to the street and to safety. Well, not exactly. When we returned two hours later, the cat was nowhere to be seen and the kitten was still on the roof meowing. Ivan Jr climbed to the roof of the third building, used all his strength and physical ability and finally reached and grabbed the kitten. Then he saw the other white and orange cat hidden under a pile of building materials, a bathtub and few broken pipes. Ivan Sr climbed to the next building too, and both of them tried to pull the cat from under the building materials. At that moment, the people living in the building arrived with flashlights to see who is walking on their roof at night. They didn’t like our explanation in broken Spanish about rescuing a cat which we threw earlier on their roof and threatened to call the police.  We had to cancel our rescue mission, the white and orange nursing cat was left on the roof, the kitten was released on the street. I really, really hope that the cat had found her way down to the street and to her baby kittens. But nevertheless, I still am afraid that I might have killed a cat and her baby kittens.

Since this night, when my lovely husband sees a cat on the street, he never misses the opportunity to say: “Do you want to throw this one on some roof, honey?”

Well, just one more cat story. One day I could probably write a book about all the cats, birds, and other creatures rescued or not so much by my wife. I’m glad we found time to visit Machu Picchu besides all the cat rescue efforts.

For me, Machu Picchu was just one more proof of the proverb “It’s better to see once than to hear a hundred times”. Everything I’ve read and all the pictures I’ve seen about the place could not prevent my jaw from dropping at the sight of it. 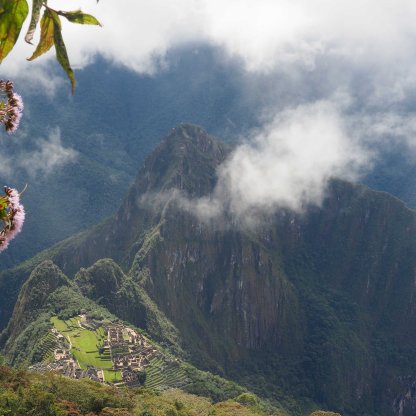 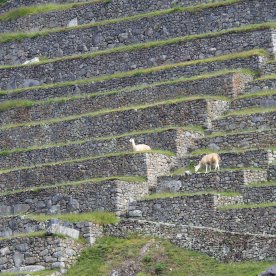 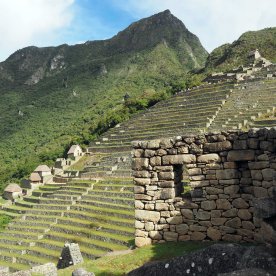 Historians are still debating whether the city has been built on the top of the mountain as a refuge for the aristocracy, fortress, Incas inauguration ceremonial place, observatory for the obsessed with astronomy Inca Pachacutec or something else.  Probably we’ll never know. After less than hundred years of being used, the city was suddenly and mysteriously abandoned by its about 1,000 inhabitants. Probably we’ll never know why. 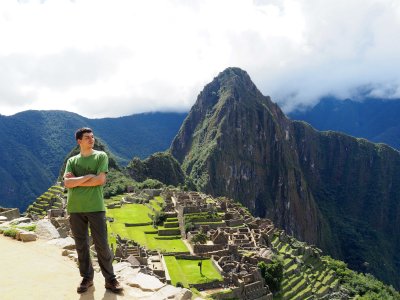 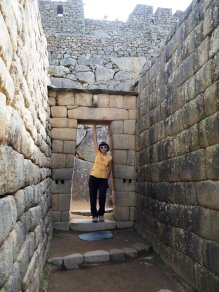 Arequipa, also known as the “white city”, is one of the most charming cities in Peru. The beautiful colonial center has more than 500 buildings recognized as historical heritage properties. Most of them are built entirely of white ash stone from the nearby volcano Misti. Big parts of the city have been destroyed by earthquakes and rebuild multiple times.

Too many different types of potatoes

Unique “Last Supper” mural. On the table, there is a gunny pig instead of lamb 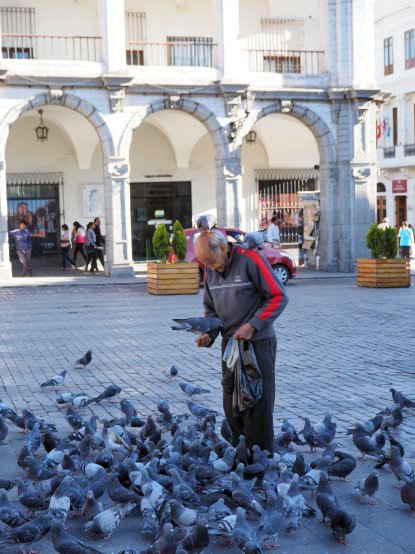 An exceptional example of the Spanish colonial architecture, the Convent Santa Catalina was built in 1579. The tradition of the times was that either the second son or daughter of a family should be in service of God.  The convent accepted women from rich Spanish families and dowry of 2,400 silver coins was paid by the family. This is equivalent of about today’s $150,000. At its best times, more than 450 nuns and their servants lived in the convent. Today, the biggest part of the convent is open for public and small part of it is occupied by 20 nuns.

One of the most visited tourist places in Peru in the recent years is the Colca canyon. Almost everyone we spoke with has either already been there or was planning to visit. Quick research on the web made us ashamed that we didn’t know anything about it and it was not on our “to-do” list.  It was advertised by the tour agencies as the deepest canyon on the planet, twice bigger than the Grand Canyon. My imagination is too weak to picture something twice bigger than Grand Canyon, so I was hooked. We are going there, no question. Marinela tried to object that may be we’ve had enough mountains and canyons and driving on dirt roads, but I was firm. The deepest canyon in the world, this is a checkmark we must put. 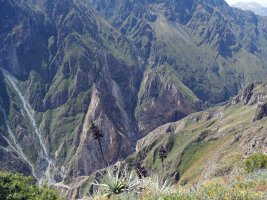 I don’t have more food 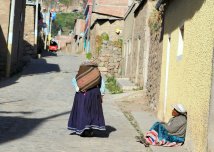 Well, Colca canyon is deep. If you measure it from the top of the surrounding mountain peaks to the bottom of the river valley, it might be twice as deep as the Grand Canyon. But to compare it to the Grand Canyon is one of the dirtiest advertising tricks I’ve ever seen.

Nevertheless, the canyon is very beautiful and we enjoyed the nice scenery and the condors. 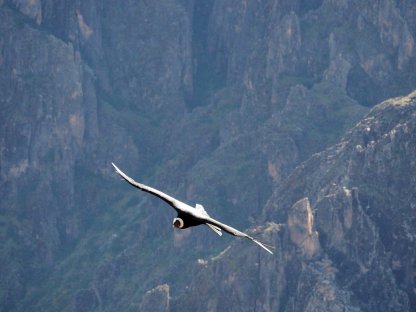 The strangest geyser I’ve ever seen. It’s in the middle of a river and it’s cold. 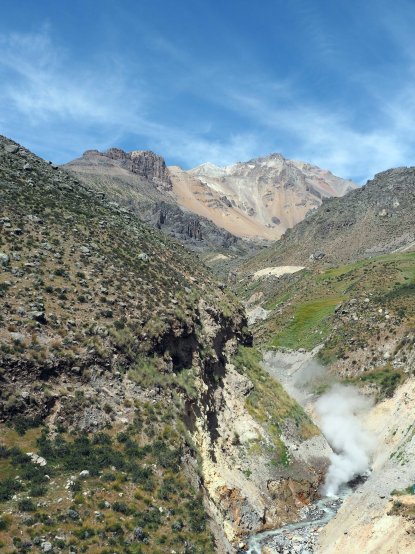 Next to Colca Canyon is the beautiful Sabancaya Volcano. 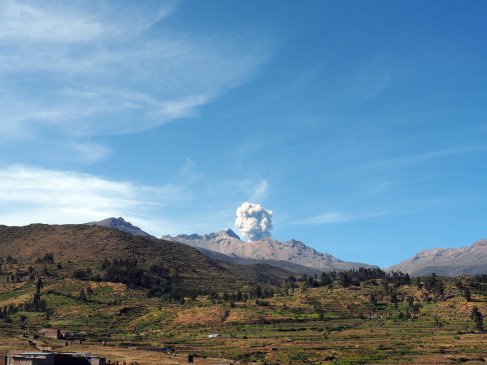 We watched as it puffed a big white or black cloud of smoke every hour or so.

We named it Puffy. We were so fascinated that we decided to go as close as possible. We drove fifty or so kilometers on high plains at around 4,500 meters altitude. The background was volcanic sand dessert, scarce of life and in some strange sense beautiful. It was extremely windy and cold, which didn’t stop us from having a 4,500 meters altitude running competition. Needless to say, the young guys are faster.

All the efforts were well prized. We weren’t disappointed when Puffy puffed one big cloud close to us.